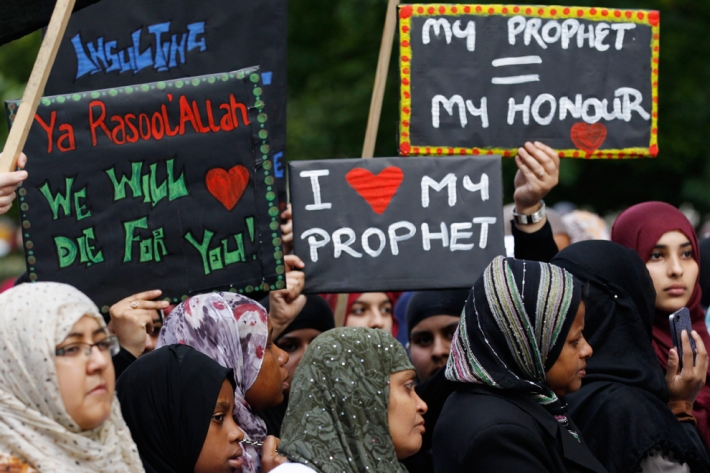 Muslims were on my street corner last week waving banners that read “Muhammad is the true prophet of God.”  They were shouting out at cars and stopping traffic calling Christians to denounce Jesus Christ.  Also last week, Muslims protested in a small Texas town proclaiming their allegiance to the Quran and stating that the federal and state laws have no authority over the Muslim world, including those adherents residing in the United States.

Tension is rising throughout the world as Muslims become increasingly militant with their claim to Muhammad as the true prophet and true redemptive act of God.  Moreover, this matter will soon come to fore as the dominant issue as the exclusive claims of Jesus Christ as the only Savior of the world are challenged by Islam.  In these last days, Christians will be called to give an account for the hope that is in them (1 Pet. 3:15).

Soon after the resurrection of Jesus from the dead, the Apostle Peter stated:

“…there is salvation in no one else; for there is no other name under heaven that has been given among men by which we must be saved.”  Acts 4:12

Peter’s statement is nothing less than an epic pronouncement of Solus Christus which was made at the very beginning of the early church, and the Christian Church has held this position from its very inception (cf. Jn. 1:1; 3:36; 14:6).

Some say all religions are similar because they all teach ethics. The truth is that the other world religions fundamentally seek to help bad people become better by choosing better personal ethics. Christianity, on the other hand, invites spiritually dead people to become spiritually alive which results in eternal life (John 3:5-7).

This is accomplished solely through Jesus’ sacrificial death (2 Corinthians 5:21). Jesus claimed that what He said took precedence over all other people’s teaching. He said He is humanity’s only means of salvation (John 14:6). Those who followed Him confirmed this (Acts 4:12; 1 Timothy 2:5). Jesus also warned about those who would try to promote a different Christ (Matthew 24:4-5).

In the Christian doctrine of salvation, we are saved from “wrath,” that is, from God’s judgment of sin (Romans 5:9; 1 Thessalonians 5:9). Our sin has separated us from God, and the consequence of sin is death (Romans 6:23). Biblical salvation refers to our deliverance from the consequence of sin and therefore involves the removal of sin.

How does God save? In the Christian doctrine of salvation, God has rescued us through Christ (John 3:17). Specifically, it was Jesus’ death on the cross and subsequent resurrection that achieved our salvation (Romans 5:10; Ephesians 1:7). Scripture is clear that salvation is the gracious, undeserved gift of God (Ephesians 2:5, 8) and is only available through faith in Jesus Christ (Acts 4:12).

Therefore, Peter’s epic statement holds true, “There is no other name under heaven by which we must be saved” (Acts 4:12).  Neither Mohammad, Buddha, nor Krishna has power to save you for none of them died to cover your sin.  Neither can random acts of kindness, meditation or karma save you, for despite your own good deeds you remain a hopelessly lost sinner.  Only the King of kings and Lord of lords – the true and living God, Jesus Christ has the power to save you. Call out to Him today.

Tim has earned a BA in Biblical Studies and Theology from Regent University, and an M.Div. from Liberty University in Pastoral Counseling. He has been certified by the American Association of Christian Counselors “AACC” in Suicide Prevention & Counseling and Marriage Counseling. Tim is also a certified SYMBIS Marriage Assessment Facilitator. View all posts by timmcmillian