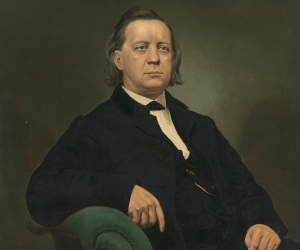 During the tenure of the great orator Henry Ward Beecher, a visiting minister (Beecher’s brother) once substituted for the popular pastor. A large audience had already assembled to hear Beecher, and when the substitute pastor stepped into the pulpit, several disappointed listeners began to move toward the exits. That’s when the minister stood and said loudly,

There were many who withdrew from Jesus, while others came to Him in secret. Nicodemus, a Pharisee and member of the Sanhedrin, an elite 70 member counsel who ruled all Jewish people, came to Jesus at night (John 3). Nicodemus was a successful man. [2] He was successful in his chosen field and had become wealthy in it, yet in all of his prosperity and notoriety, God was not present in his life. This man, although sitting right in the midst of the Assembly of God’s own chosen people, recognized that God was missing in his life, and so, he sets out to find God and for this reason he comes to Jesus.

After attending church on Sunday morning, a little boy knelt at his bedside that night and prayed, “Dear God, we had a good time at church today – but I wish you had been there!”

I don’t know about you, but I’ve been to a few church services that after leaving, I could have said the same thing as that boy, and this was probably the way Nicodemus was feeling at that time. He had heard and seen some of the miracles of Jesus and recognized that God was there. Finally, God has come to my town and now at last I have a chance to meet with Him.

Nicodemus comes to Jesus and opens his conversation professing to know Jesus is of God and Jesus replies cutting right to the point, “… I say to you, unless one is born again, he cannot see the kingdom of God.”

By this, Nicodemus is not only surprised but surely taken aback. After all, “I’m a religious leader in this town”, he could have said. “I’m religious and successful, are you implying I don’t know God?’. ‘I pastor a large church – the temple in Jerusalem, what do you mean ‘I must be born again?’” Wanting to draw an explanation of this tremendous statement from Jesus he replies, “How can a man be born when he is old? Can he enter a second time into his mother’s womb and be born?” In other words, “do I have to go back and start all over”, as if physically living life all over again?

But then, Jesus, while responding to Nicodemus’ question, again makes another remarkable statement regarding new birth;

“As Moses lifted up the serpent in the wilderness, even so must the Son of Man be lifted up” (John 3:14).

This takes us back to around 1600 BC, when after leaving Egypt, the people of Israel traveled from Mount Hor along the route to the Red Sea, to go around Edom. But the people grew impatient on the way; they spoke against God and against Moses, and said, “Why have you brought us up out of Egypt to die in the desert? There is no bread! There is no water! And we detest this miserable food!” Then the Lord sent venomous snakes among them; they bit the people and many Israelites died.[3]   The people came to Moses and said,

Now, you may ask, why a snake? It was the snake who deceived Eve in the garden where sin began. Also, the Bible tells us that “He made him who knew no sin, to become sin for us, so that we may become the righteousness of God in Him” (2 Corinthians 5:21).

When the people repented and asked Moses to pray that the Lord would remove the fiery snakes, God told him to make a snake and fasten it to a pole. The Hebrew word translated “pole” is nes. In the ot, nēs generally means a rallying point or standard which drew people together for some common action or for the communication of important information.[4] According to The Exegetical Dictionary of the NT, the word Jesus used for “lift up” in Greek was, hypsoō, which means to raise up or to make great.

This applies to us in a radical way!

Later, according to the apostle John, Jesus said, “And I, if I am lifted up from the earth, will draw all people to Myself.” (John 12:32).

On a personal level – as a matter of the heart, unless we see the Lord magnified in and through our lives; unless he is made great in our sight, we will not have the faith, the heart to experience Him working in our lives to the degree we would if He were high and lifted up in our minds eye and heart.

Joshua 3:6 says, “Joshua was magnified in the sight of Israel the day he crossed the Jordan.” I refer to Joshua for a couple of reasons; one, the crossing of the Jordan was a huge and formidable task to the people, but not only that, it was also a pivotal moment in their lives. For at that time, they were moving forward to an uncertain future, yet promised to their fathers, it remained unrecognized to the people so far. But now, by faith, they moved forward to lay hold of those promises.

The second reason I refer to Joshua and the crossing of the Jordan is that when the people crossed the Jordan, they set up stones as a memorial and it says these stones were so that all people will remember. This is key to me and to you, for it is that when Jesus is lifted up, “He will draw all people to himself” and there is in fact a tie-in between the two. Israel’s crossing of the Jordan is a good example to us, for many are the promises we have to us from God, and we’re to move forward in faith and lay hold of the reality of them for us personally in our lives. And for us to move forward and experience forgiveness, healing and the filling we’re to receive from God, our greater than Joshua – Jesus is to be magnified in our minds eye and hearts if we’re to be Born Again and if we’re to be healed of the sin or whatever else has bitten us so we come to know the reality of God working in and through our lives.

Jesus said, “If I’m lifted up” I will draw all people to myself. Unless He’s lifted up in my life, unless He’s magnified and made big – a priority in my life and heart, I will remain as lost, as beaten down and discouraged as ever. But as I lift Him up, He faithfully draws me to Himself and heals me of whatever plagues me. But that’s not all, for He said He would draw all people to Himself if He’s lifted up, and as I lift Him up, everyone else I come in contact with, they’re healed too as they come to Him. It’s a wonderful miracle, the miracle of New Birth.

Now, there were no doubt those who said, “You’re telling me all I have to do to be healed is look at a pole and see a brass snake? What good will that do? I need some anti-venom.” Or, “If I can get the right prescription, I can get over this infection.”

There are people today who will not look to the One who hung on the pole of the Cross. There are those “Christians” who will not lift up, magnify or exalt the Lord in their own eyes, but rather choose to struggle and wrestle with things instead of moving forward toward the promises God has given them. “All I need is some Prozac,” they say, “or a beer,” or “a hot fudge sundae. All I need is something to fill up the hole in my soul.”

Nicodemus recognized this. Although he, as a highly religious man, was sitting right in the middle of the church, he knew God was not working and present in his life. But knowing this, he looked to Jesus and came to Him for his souls longing.

Jesus said, “If I be lifted up” – as Moses raised the bronze snake on the pole, the people were healed. God’s Word is true. If I’m to experience healing in my life – if you’re going to experience the healing and filling you desire in your life, you first must look to Jesus. Lift Him up in your eyes and see Him as your healer redeemer – the God of your life. God said the only thing we must do is to realize we’ve been bitten and look to the Serpent on the Cross. The one who does so will be made whole. It’s just that simple.

O magnify the LORD with me, and let us exalt his name together    Psalm 34:3

Tim has earned a BA in Biblical Studies and Theology from Regent University, and an M.Div. from Liberty University in Pastoral Counseling. He has been certified by the American Association of Christian Counselors “AACC” in Suicide Prevention & Counseling and Marriage Counseling. Tim is also a certified SYMBIS Marriage Assessment Facilitator. View all posts by timmcmillian